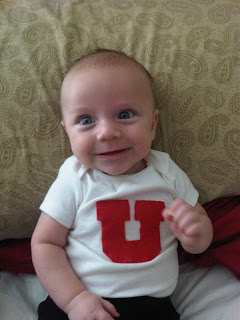 Well my baby is 3 months old today!! He's seriously so much fun. He's sleeping good and napping good which I am in love with. He loves to play with the toys on his play yard and loves to check himself out in the mirror. Reagan can roll onto his side and he LOVES pears. We got to start him on baby food a few days ago and he's only had pears so far and well he loves them. He doesn't really understand the spoon yet but he's getting better at it :)
He is a very determined little boy. He knows what he wants and when he wants it! Its going to teach me patience now but it will make for a wonderful man someday.
Sometimes he says Hi. It's not just a noise you can actually tell he's trying to say hi.
He absolutely loves his daddy. In the mornings he wakes up about the same time as Ben and Ben will go talk to him and Reagan gets so excited. It's really cute.
Oh Reagan also loves his bears :) His mobile has 3 bears on it and he will sit and talk to them and smile when we turn it to make them move.
He loves getting his diaper changed ha ha. I think it's because he likes to not have clothes on. He will sit and smile and talk to you when you do it and he gets mad when I start dressing him again.
Reagan has definitely been such a joy to have. He's not a mellow child, he's very alert and active and likes to be in the know.
Posted by The Chappells at 2:56 PM